MATHEMATICS IS MOTHER OF ALL TECHNOLOGIES CONFERENCE CONCLUDES

ISIAM was established in 1990 to promote the teaching and research of those areas of mathematics which have great potential to solve problems of science, engineering, medical and social sciences. In the last 25 years the Society has endeavored to achieve this goal. It has popularized this theme by organizing 12 international conferences in different institutions of India, publishing their proceedings with leading publisher like McMillan India, Longmann-Pitman Lecture Notes in Mathematics, Narosa, Kluwer Academic Publisher, Marcel Dekker, Taylor and Francis, American Institute of Physics, World Scientific Publisher, Springer. More than three dozen eminent scholars like Prof. I. Sloan (past President ICIAM), Prof. Peter Markovich (Newton Institute, Cambridge), Prof. Alain Arneodo (France), Prof. I.S. Duff (Director, Rutherford Laboratory of Numerical Analysis, London), Prof. M. Broakate (Technical University Munich, Germany) have delivered lectures in our earlier conferences. Very recently ISIAM has entered into an agreement with Springer to bring out a series on Industrial and applied Mathematics. Two books have already been published while several proposals of distinguished mathematicians of the world are under review by the Editorial Board.

The Conference was devoted to emerging themes of industrial and applied mathematics such as image processing with special focus on medical imaging, biometrics and tomography. It is not an exaggeration to say that these concepts have wide applications in oil industry, brain studies, seismology, and other branches of science and technology. A recent branch known as wavelet methods has been discussed by several experts attending this Conference. It is a refinement of Fourier analysis which is in practice since past 200 years.

Applications of Mathematical concepts to areas like National Security, Homeland Security & Law Enforcement, Enterprise and E Government Services, Personal Information & Business Transaction, Brain like computers were discussed in detail during three days. Attempt should be made to popularize these applications.

India is well known throughout the world for its contribution to the ancient mathematics and even it is generally recognized by the good work in modern pure mathematics, especially by the work of Tata Institute of Fundamental Research, Bombay and Central Universities. Several important conferences have been organized to promote and popularize the contribution of celebrated Indian mathematician, M.S. Ramanujan. It is well known that most of the educational institutions of higher learning in our country mainly focus on pure form of mathematics, definition, existence and uniqueness theorems, lemmas and corollaries. Generally problems are direct and well posed (solution exists which is unique and stable). In real world, most of the problems are not of this nature. Those problems which are not well posed and direct have been ignored for a long time. Illustration of mathematical problems with physical phenomenon or processes and interpretation of solutions and its visualization or formulation of physical phenomenon in appropriate mathematical concepts is not emphasized in the teaching of mathematics. The Society which is celebrating its 25 years of its existence was formed to provide training and research to solve the untouched problems which are quite challenging and related to many real world problems.

On this occasion- Silver Jubilee celebration of ISIAM 2016, the Indian Institute of Technology Bombay organized a 5 days advanced level workshop on an emerging theme –Variational Inequality and Applications under national programme on Differential Equations: Theory Computation & Applications. Fifty brilliant research scholars & young faculty members from all over the country attended this workshop. Distinguished experts of this field from India & abroad delivered series of lectures between 24th and 28th of January, 2016.

It is not out of place to say few words about the institution hosting the Conference. The Sharda University was established in 2009 by untiring efforts of Mr. P.K. Gupta, Chancellor and Mr. Y.K. Gupta, Pro-Chancellor. Currently, Sharda University having highly qualified faculty members has students from more than 30 countries. It comprises of Schools of Basic Sciences & Research, Engineering and Technology, Medical Sciences and Research, Architecture and Planning, Art, Design and Media Studies, Law, Allied Health Science, Language and Culture, Nursing Science and Research. Its faculty members are publishing their research papers, books, monographs, conference proceedings with leading publishers of the world such as Springer, Taylor and Francis, American Institute of Physics, World Scientific Publisher, Elsevier, etc.

Although Sharda University is comparatively young Institution but determination of the Chancellor and Pro-Chancellor has made it possible to organize a conference of this magnitude and scale. Hon’ble Shri Rajnath Singh, Home Minister, Govt. of India who is Physicist by profession, very kindly squeezed time out of his extremely busy schedule and inaugurated Silver Jubilee Conference of ISIAM on 29th January 2016. This shows his keenness to promote science and technology in the country.

Brief introduction of those who have been honored and those who received awards are given below:

Dr. Gowda is a fellow of Indian National Science Academy and Dean of TIFR Centre for Applicable Mathematics, Bangalore. Indian Society of Industrial and Applied Mathematics (ISIAM) honours Professor Gowda for his outstanding contribution in Applied Mathematics on the occasion of Silver Jubilee of ISIAM (2016).

Dr. Rangarajan has number of honors and awards to his credit such as J. C. Bose National Fellow, Homi Bhabha Fellow, Chevalier dans l’Ordre des Palmes Academiques (Knight of the Order of Palms), Government of France. He is a fellow of Indian Academy of Sciences and National Academy of Sciences, India. Indian Society of Industrial and Applied Mathematics (ISIAM) honours Professor Rangarajan for his outstanding contribution in Applied Mathematics on the occasion of Silver Jubilee of ISIAM (2016).

An important problem solved by Prof. Adimurthi is related to the existence in two dimensions of solutions of critical exponent problems, a major hurdle in PDEs because of its non-compact nature, especially in low dimensions. Dr. Adimurthi has investigated the problem with Neumann boundary conditions for about ten years and proved several conjectures. Later, he shifted to the study of Hamilton Jacobi problems and conservation laws with discontinuous fluxes. He has investigated this systematically and proved the existence and uniqueness of physically relevant solutions.

Professor Husain undertook a challenging initiative to establish Materials Research Laboratory which is recognized as a Training Centre in semiconductor by ICTP, Italy and NAM Centre, New Delhi. This training centre has provided training to a large number of scientists from SAARC countries. Professor Husain introduced various aspects of nanotechnology which are solved by the application of Applied Mathematics. A group of researchers under his leadership has worked on non-linear vibration of single wall carbon nanotubes.

Professor Husain is actively associated with Indian Society of Industrial and Applied Mathematics (ISIAM) and has made significant contribution in its expansion. He has provided whole hearted support in achieving the objectives of ISIAM.

The valedictory function was attended by distinguished scholars who were unanimous that interaction between mathematicians, engineers and physicists should be enhanced which will help to improve the quality of research in these disciplines. They are of the opinion that prosperity and development of any nation is directly related to the advancement in applied mathematics. Prof. U.P. Singh Chairman Silver Jubilee Programme Committee strongly feels that the community of Industrial and Applied Mathematicians should approach to the Hon’ble Prime Minister Shri Narendra Modi to incorporate promotion of Industrial and Applied Mathematics in his agenda of Make in India. He suggested that a concrete proposal should be submitted at an earliest opportunity. INTERNATIONAL CONFERENCE
On
The Occasion of Silver Jubilee of the Indian Society of Industrial and Applied Mathematics (ISIAM)
at
Sharda University, Knowledge Park- 3, Greater Noida, UP (Delhi NCR), India
29-31 January 2016 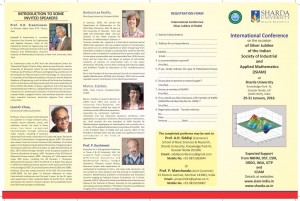 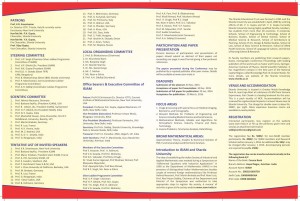 International Conference on Emerging Areas of Mathematics
for
Science and Technology In conjunction with 12th Annual Conference of the Indian Society of Industrial and Applied Mathematics
January 30 – February 1, 2015 International Conference on Emerging Areas of Mathematics for Science and Technology 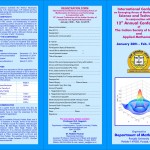 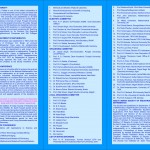 11th Biennial conference of Indian Society of Industrial and Applied Mathematics (ISIAM) was held during 15-16, December at GBU as an event of the National Mathematics Year 2012 to commemorate 125th Birth year of the Mathematics Wizard Srinivasa Ramanujan. The conference was attended by more than 200 persons belonging to different specializations of Mathematics, Engineering, Physics, Computer Science, Information Technology and Management studies coming from various states of India and countries like USA, Germany, France, Italy, Turkey, Saudi Arabia and Oman. The conference was really interdisciplinary in nature, where applications of Mathematical concepts to emerging technologies were focused.

The Proceedings of the conference comprised 4 invited talk sessions, 6 contributed talk sessions, one panel discussion session and a session on 125th Birthday celebration of Ramanujan. Prof. Dinesh Singh, Vice-Chancellor Delhi University was the chief guest of this function, Prof. K. Srinivasa Rao, Director Srinivasa Ramanujan Academy of Maths talent, Chennai (first DST- Ramanujan Professor) was the principal speaker on the life and work of Ramanujan. He delivered an interesting talk and presented a CD-ROM to the chairman organizing committee.

The chief guest, Prof. Dinesh Singh delivered a remarkable address dealing with the special features of the character and research contribution of mathematics wizard Ramanujan.

Out of 108 research papers submitted by young researchers for presentation, we could accommodate only 50 papers due to shortage of time. The organizers appreciate the enthusiasm of young researchers and wish them all success. Some of the papers presented during the conference by young Indian researchers were highly appreciated by foreign invited speakers.

Application of Mathematical Models, Methods and Algorithms to Nano-Technology was discussed in great detail by Prof. Mushahid Husain. As we know, during the contemporary time mathematics is visualized as the mother of all technologies . The main message of the conference is that mathematics has great potential to analyze and understand the challenging problems of Nano-technology, Biotechnology, Medical Science, Oil Industry and Financial Technology. It has been emphasized throughout the conference that young researchers of the country should embark on those areas of mathematics which have been found significant applications in these fields.

A- Speakers of the Inaugural Function

B- University Administrators who participated in the conference

F- Members of Various Committees who actively participated in the Conference